The project was divided in three phases. Phase 1 included the area east of U.S. 1 that required clearing and grubbing of dense vegetated wet lands approximately 20 Acres, a car rental lot, a warehouse, and light vegetation around 30 Acres. Phase 2 West portion of old runway 136 Acres and Phase 3 the East side of the old runway 85 Acres. The complete site was 271 Acres.

The old runway was removed and ground on site to be reuse as embankment approximately 297,000 SY. The concrete foundation was ground on site to be reused as embankment also, minimizing the disposal to vegetation and miscellaneous debris. Finally we demolished the old radar tower by removing the bolt and support of one side and installing a temporary support on the opposite site. After the two legs with the temporary support were cut using a steel cable and a 100,000 LB excavator we pull the tower down. We hired a local structural engineer to do calculations and ensure the safety of all employees. 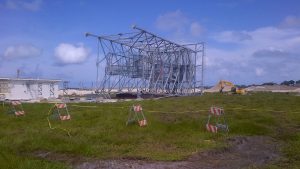 DemolitionClearing And Grubbing
Go to Top